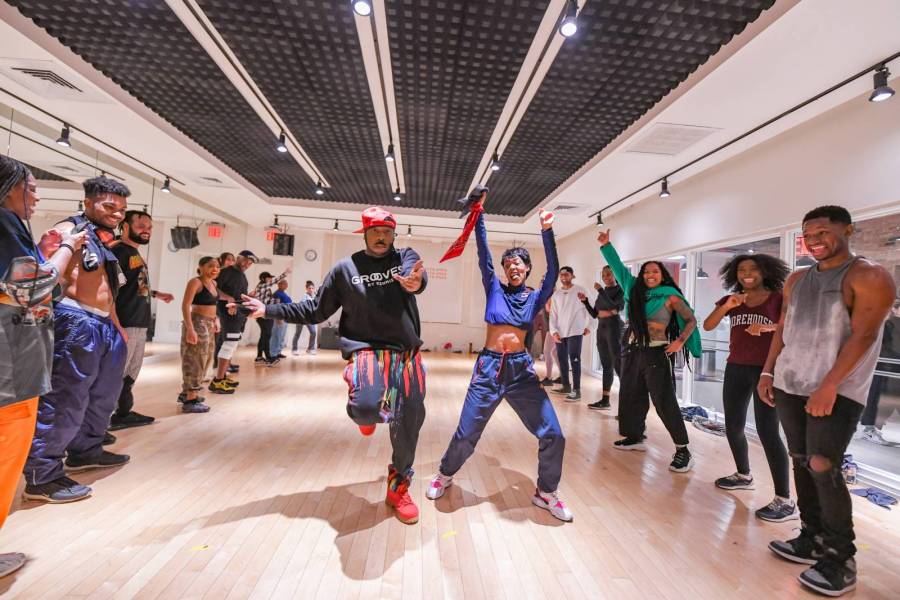 New York, NY – It’s difficult to get a group of New Yorkers to agree on anything, these days, but you wouldn’t know it by the number of people gathered in the EXPG Studio nestled in the hip New York City enclave of the Lower East Side, not far from the Bowery and other former rock bastions.

On this evening, Hip Hop has taken over the LES, and celebrity choreographer Kennis Marquis is leading the charge. He’s standing before a class of about 50 or so people — a true mixed bag of genders and races, all of different shapes and ages — getting ready to lead them all through a few Hip Hop dance-inspired warm-ups. A remix of Busta Rhymes’ classic track with Swizz Beatz, “New York Shit,” is blaring through the speakers, and it isn’t long before the floor beneath our feet is shaking, people are laughing, and a proverbial good time is being had by all.

“That’s really the point of all this, you know?” Marquis told HipHopDX exclusively. “For me, it’s not just about teaching people how to dance — although, it’s nice — but it’s about having a good time and preserving the culture, too.”

The “culture” here is not just Hip Hop music — but of the sum total of Hip Hop culture as a whole. And that culture includes everything from clothing, to DJing, to rapping, and back around to dancing and even, in some cases, the incorporation of sports (like streetball) into performance art. And that desire to preserve the culture — that continuous push to galvanize what was once limited to oral history — is a void that Red Bull, as a company, has seemed to fill quite nicely and organically. Whereas many corporate companies shy away from the incorporation — let alone the preservation — of Hip Hop, Red Bull not only survives well in the space, but it thrives well in the space.

And Tuesday’s class — called GROOVES, named after Marquis’ popular dance class which originated in his adopted hometown of Los Angeles — is no different. The Red Bull dancer on hand — the mononymic Angyil — is now leading the class through the dance/workout, which is all powered by Red Bull Zero, the new sugar-free option of the popular energy drink.

“It makes sense for Red Bull to exist in this space,” said Angyil, who says she loves dancing to a variety of Hip Hop songs, but grew up in a house where funk and jazz were the predominant musical driving forces. “They’re authentic. They get it. They get us.”

But for Marquis — who served as a choreographer for some of Hip Hop’s greats, including LL Cool J, Ludacris, and P. Diddy — the “us” factor is a factor that’s ever-in-flux. “What I do in New York? I only do that in New York,” he said. “New York Hip Hop has a totally different vibe than, say, West Coast Hip Hop, which is, of course, different from Midwest Hip Hop. No matter where we are, though, Hip Hop is that universal language — and dance, it’s what unites us all.”

CORONAVIRUS claimed its youngest victim on Monday, Ismail Mohamed Abdulwahaba, a 13-year old boy with no apparent underlying health conditions. In a statement, his family revealed one of the symptoms […]