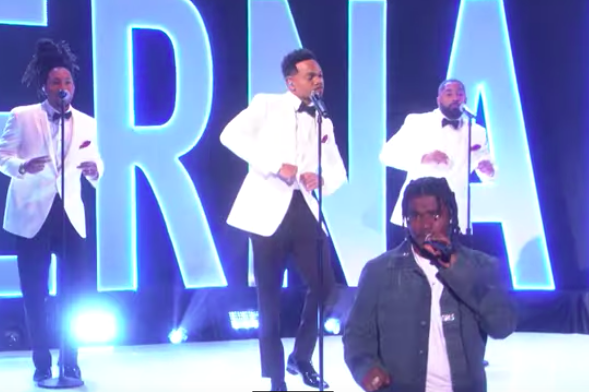 Chance The Rapper swung by The Ellen Show on Wednesday (September 11) to perform “Eternal” with Smino, off his new album The Big Day. Chance and his two backup vocalists channeled vintage Motown on an elevated stage as they donned white tuxedos and broke out some choreographed dance steps.

More than halfway through the track, Smino was given centerstage as he came out in a denim jacket to spit his verses, before Ellen joined the stage in her own white suit to close out the performance.

The Chicago MC also sat with Ellen to discuss his debut album, marriage, his newborn daughter, and the drive behind his philanthropic work. “Jesus teaches to care for your neighbor and care for people that aren’t necessarily your blood but still a part of your body, because we’re all humans. I think that’s an impactful thing that I understood more as I got older,” he explained to Ellen.

The televised appearance came just a day after Chance announced he’d be postponing his tour in lieu of spending time with his wife and two daughters.

Vitamin B12 deficiency symptoms: Unusual sensation that affects mobility could be a sign

Vitamin B12 deficiencies are very common, especially amongst the elderly. A person becomes at risk of having a deficiency if they don’t get enough from their diet or aren’t able […]